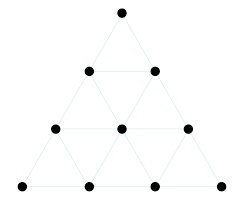 Depicted above is the Pythagorean Tetractys, ancient mystical symbol of initiation. This symbol will accompany us throughout the day and empower your workings afterwards.

Of the letters in Nero’s name

And in ‘murdered his own mother’

You will find their sum is the same

-graffiti etched on a wall in Rome, as recorded by the historian Suetonius, around 60AD in ‘The Twelve Caesars’

“If you only knew the significance of the 3, 6 and 9 then you would have a key to the universe” – Nikola Tesla

From time immemorial people have examined the patterns of numbers in an attempt to discover their occult significance.

On this day leading numerologist Richard Abbot will introduce you to the Secret Language of Numbers. His teaching style is clear and direct and the day promises to be fascinating for all those who wish for a better understanding of the relevance of numbers to their magic, life and development.  You will learn insights into:

Richard Abbot has written a variety of books on numerology and spiritual practice. He has been described as a ‘clear thinker’ and has been studying numerology, tarot and magic since the late 1980’s.  He teaches numerology at the College of Psychic Studies and has appeared at venues throughout the UK, having spoken at the London Tarot Conference numerous times. He is very much a “friend of the shop”.

It is important to reserve your place by paying in advance for this workshop, so please either click the PayPal button below (which will allow you to pay online even if you don’t have a PayPal account – just use the “checkout as a guest” option) then email me with a contact phone number in case I need to get in touch, or call 020 7405 2120 if you would prefer to pay over the phone.  Please note that we can only offer a full refund for any cancellations notified to us at least 48 hours before the event.