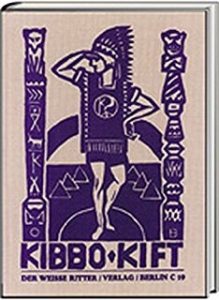 Please join us at the Shop for a very interesting evening with Ian Read, known to many as a leading exponent of Chaos Magic and Rune Lore.

Ian will be presenting his work on the Kindred of the Kibbo Kift, an English folk organisation established by John Hargrave in 1920 to rival, even surpass, the Scout movement.  John Hargrave aimed high, claiming that the Kibbo Kift was to be no less than the human instrument that would create a new World Civilisation. The following January, perhaps unsurprisingly, Hargrave was expelled from the Scouts.  Conceived of as an instrument of change, Hargrave stated in 1927 that the purpose of the Kibbo Kift was ‘to train a body of men and women who, having drawn apart from the mass, would fit themselves to act as a catalyst on a corrupt and directionless society and lead it back to health and wealth.’

Come along to meet Ian and learn more about this most interesting of organisations.  To reserve your place please email or call the Shop on 02074052120.  Tickets cost just £10.