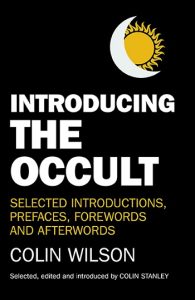 The Gardner Room at The Atlantis Bookshop

We are pleased to be hosting at the Shop Colin Stanley, the bibliographer of the late, great Colin Wilson, for the first Evening with… of the new year. To book your place, please click the link below to buy a ticket.

When The Occult appeared in 1971, several readers, enthused by Colin Wilson’s previous books on existentialist philosophy, accused him of abandoning the rigours of his ‘Outsider Cycle’ for a much more trivial pursuit. Of course, he had not abandoned philosophy at all. Indeed, he always considered his ‘serious’ occult books to be a logical extension of his ‘new existentialism’, providing evidence that man possesses latent powers which, if tapped and harnessed, could lead to hugely expanded consciousness and potentially even an evolutionary leap. He went on to write two more large books on the subject: Mysteries (1978) and Beyond the Occult (1988) which came to be known as his ‘Occult Trilogy’ and are now acknowledged classics in the field of the Occult Sciences. The three books amounted to a monumental 1600 pages and spawned many other lesser works on the subject.

As a result he was constantly sought out by authors and publishers to endorse their work. He rarely refused, writing over 180 introductions, forewords, prefaces and afterwords to other authors’ books. Introducing the Occult collects together the best of these into one volume.

In this talk Colin Stanley, Colin Wilson’s bibliographer, traces Wilson’s interest in the occult back to his earliest work in the 1960s, particularly the fiction: Man Without a Shadow, The World of Violence, The Glass Cage etc.

We look forward to welcoming you to The Atlantis Bookshop next week for this very interesting event.