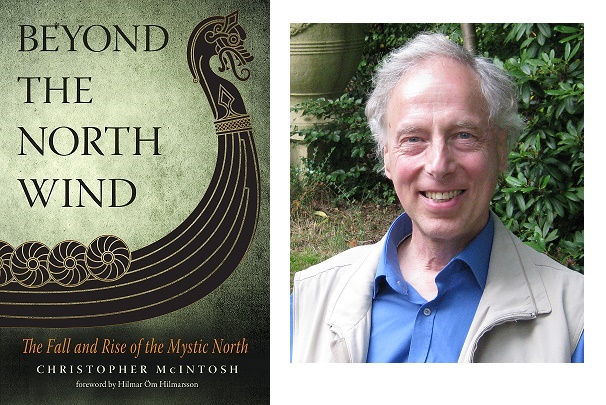 We are pleased to announce that we will be launching the latest offering from Christopher McIntosh.  A short introductory video of the book can be found here.

Vikings, runes, Norse religion, and Greek mythology — these are just some of the topics Christopher McIntosh weaves together in his fascinating exploration of the mystical concept of “the North.”

“The North” is simultaneously a location, a direction, and a mystical notion, and although the concept has ancient roots, it continues to resonate today. McIntosh leads readers through the magical and spiritual history of the North, as well as its modern manifestations. This mythic conception of a unique, powerful and mysterious Northern civilization was known to the Greeks as Hyperborea — the “Land Beyond the North Wind.” In addition, McIntosh discusses Russian Hyperboreanism, which he describes as being among “the most influential of the new religious and quasi-religious movements that have sprung up in Russia since the fall of Communism.”

Dr. Christopher McIntosh is the author of many books on esotericism and the inner traditions. He holds a DPhil in history from Oxford, a degree in German from London University and a diploma in Russian from the United Nations Language School. After working in London in journalism and publishing he spent four years in New York with the United Nations Development Programme, then moved to Germany to work for UNESCO. In parallel he has pursued a career as a writer. His books include The Astrologers and their Creed (1969); Eliphas Lévi and the French Occult Revival (1972); The Rosicrucians (latest edition 1997); The Rose Cross and the Age of Reason (1992); The Swan King: Ludwig II of Bavaria (latest edition 2003); and Gardens of the Gods (2005). His fictional work includes the occult novel Return of the Tetrad (2013), the spy thriller The Lebensborn Spy (2017) and the short story collections Master of the Starlit Grove (2014), The Wyrde Garden (2015) and The Sorceress of Agartha (2017). With his wife, Dr. Donate McIntosh, he produced a new translation of the Rosicrucian Fama Fraternitatis (2014). He also has a long-standing interest in nature-oriented belief systems and the Pagan movement. He has lectured widely and was on the faculty of the distance M.A. programme in Western Esotericism at the University of Exeter, England, now sadly discontinued. His home is in North Germany.

“BEYOND THE NORTH WIND” costs just £13.99.  To reserve your copy, please contact us now, or you can buy from us using the PayPal button below (an additional £3.50 will be automatically added to cover UK postage).  You can use this option to pay online even if you don’t have a PayPal account – just use the “checkout as a guest” option.  If you would like a copy sent overseas, please send us an email with your information and we will reply with further details.