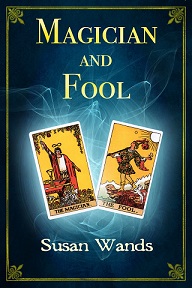 Historical Fiction with Sir Henry Irving as the Magician

We are very pleased to be hosting Susan Wands, author of Magician and Fool, here at The Atlantis Bookshop.  The evening will include a reading from the novel and talk about the key protagonists within the story – Bram Stoker, Pamela Colman Smith, Sir Henry Irving, Aleister Crowley and more.

In Magician and Fool, Pamela Colman Smith begins her career as an artist at the end of the Victorian Age at the Lyceum Theatre, where she grows from innocent empath to seer and channeler; creating

her now world-famous deck of tarot cards.  Introduced to The Golden Dawn cult by Bram Stoker, the second in command at the Lyceum Theatre, she is commissioned to create a tarot deck for the members to use in their quest for magic.

Golden Dawn’s most evil member, Aleister Crowley, becomes obsessed with unlocking the mysteries of the Tarot.  His obsession peaks when he sees the power of her deck and realizes he can create a rival deck, leading him to manifest magical power to harm Pamela’s incarnates of her cards.  She learns the extent of her power over her creations through a battle over her gifts and magic.

Susan Wands is a writer and an actress who has written plays, independent film scripts and historical novels. Magician and Fool, the historical fiction novel based on Pamela Colman Smith, has been a work in progress for eight years.

Please contact The Atlantis Bookshop to reserve your seat.